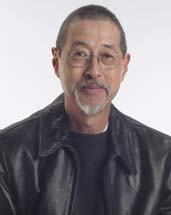 Patrick Nagatani (1945-2017) was professor emeritus in the Department of Art & Art History at the University of New Mexico where he taught from 1987 to 2007.  A major survey of his work titled Desire for Magic: Patrick Nagatani 1978-2008, opened at the University of New Mexico Art Museum in 2010 and was accompanied by a retrospective publication of the same title. Impeccably produced, the monograph includes seven scholarly essays and features Nagatani’s most significant photographic projects as produced over his long and distinguished career.

Nagatani received his M.F.A. degree from the University of California, Los Angeles (1979) where he studied with the influential artist, Robert Heinecken. His career achievements, honors and awards are numerous and include the Honored Educators Award from the Society for Photographic Education (2008), the Eliot Porter Fellowship from the New Mexico Council on Photography (2007) and the Governor’s Award for Excellence in the Arts, New Mexico (2003). He was the recipient of Visual Artist Fellowships from the National Endowment for the Arts in 1984 and 1992, and a Photographer’s Fellowship from the Aaron Siskind Foundation in 1997. In 1991 Nagatani earned the Outstanding Faculty Award from the College of Fine Arts, and from 1998 to 2000 he was honored with a Regent’s Professorship.

Nagatani has given numerous public lectures, seminars and workshops and his work has been exhibited widely both nationally and internationally with over 60 solo exhibitions and 25 exhibitions of collaborative Polaroid work with Andrée Tracey.

NUCLEAR ENCHANTMENT, Albuquerque: University of New Mexico Press, 1991.There are forty images in this body of work. Patrick Nagatani on Nuclear Enchantment:

“Since my arrival in New Mexico, twenty-three years ago, I have become increasingly aware of the various activities in the scientific, military, mining, medical, etc. industries here in my home state. The historical as well as the contemporary development of the nuclear industry, as well as its impact on this state has been my prime emphasis of investigation. A concern of this work is to promote a dialogue with and about the contemporary/historical landscape of the state that contains the most extensive nuclear weapons research, management, training, and testing facilities and organizations in the United States.

My intentions are to raise public consciousness about the effects of New Mexico’s nuclear industry which continues to grow despite the damage it has already caused and will continue to bring to the state. The series, Nuclear Enchantment, attempts to awaken the many New Mexicans who still believe nuclear power poses no threat and that defense spending promotes the economy. Culturally and geographically connected to Mexico, it is perceived by the elite powers as a place that can be abused and even reduced to rubble.

“Are we a society so blinded by the powers of science that we will continue to support a destructive industry rather than seeking alternative solutions? Many of the photographs in Nuclear Enchantment are of actual sites presided over by a cast of ancient mythic figures. I hope that they are captivating and enigmatic. I want them to remind us of the spiritual poverty of the technical age. In some of the work, I use figures from the great nineteenth-century Japanese woodblock artist Hiroshige whose art commented on Japan’s transition from ancient Shintoism to Westernization – a path that ultimately led to Hiroshima.

In my work, I intentionally show a levelled world. Polluted skies, contaminated earth, nuclear explosions, fantastic happenings are all seen in the same light (regardless of the effect they have on people that are actually experiencing such events, for whom the events are not images, but occupy their moment); natural, social, mythic, physical, and psychological experiences are all leveled at images. Even I (the artist) becomes an image, a desensitized subject in several of my own installations. The levelling is by choice, as in Baudrillard’s “active indifference”. (Jean Baudrillard, In the Shadow of the Silent Majority, 1983)

“My reality and depiction are within this levelled world. It is within what known scientific information we learn and retain. It is within this social/political/economic period of time. And it is within photography, painting, installation, and performance. I hope that Nuclear Enchantment is thought-provoking, yet technically brilliant, and richly beautiful despite the grim tidings. Like the macabre yet jewel-like images from medieval books of hours dealing with the “Office of the Dead,” I point a bony finger at the contemporary dance of death we are on the verge of joining.” 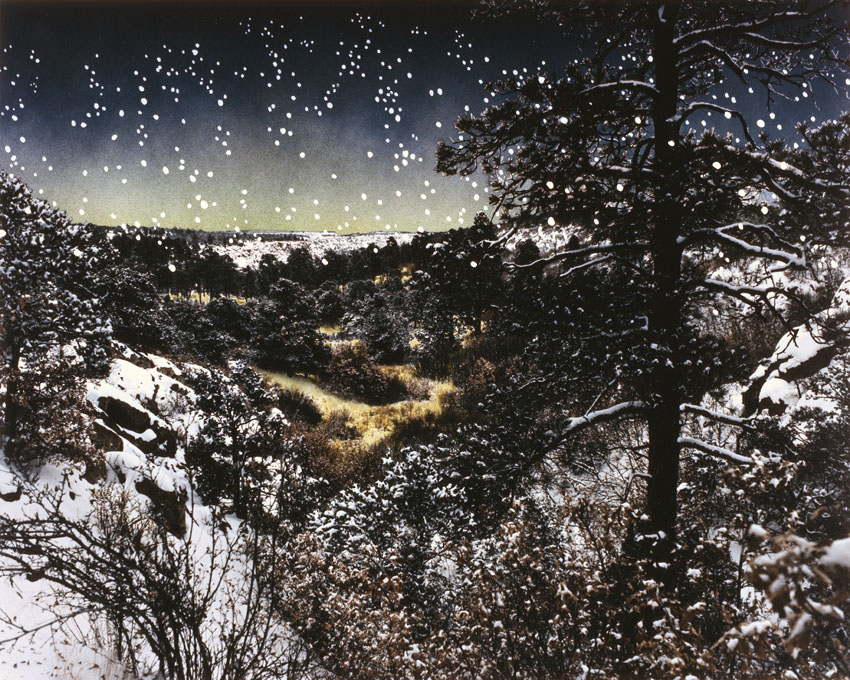 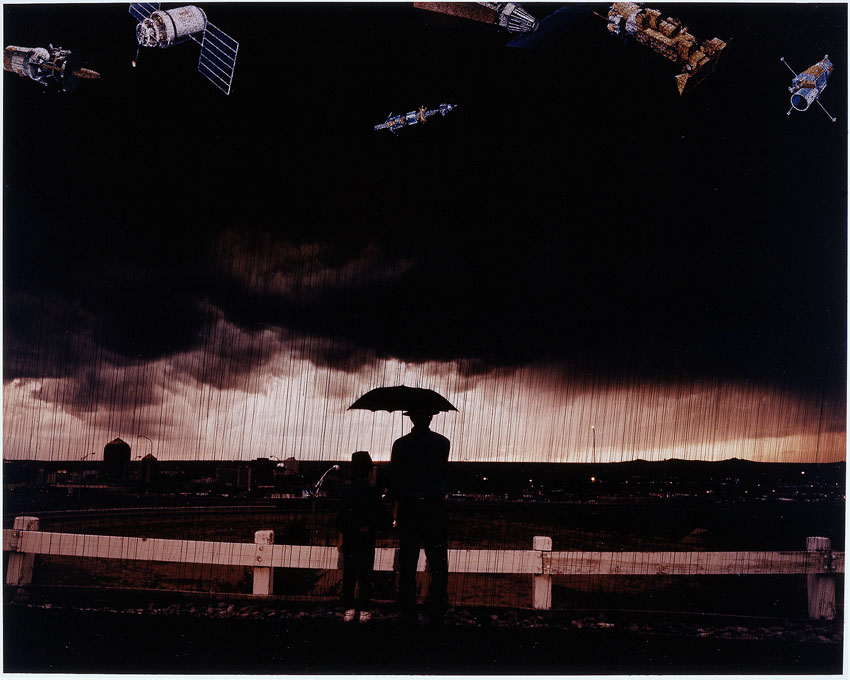 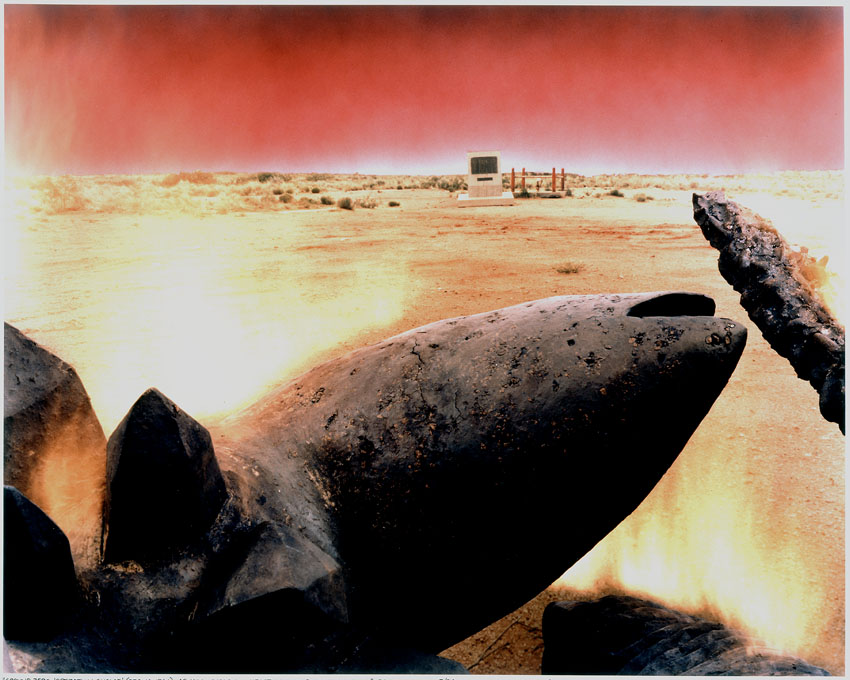 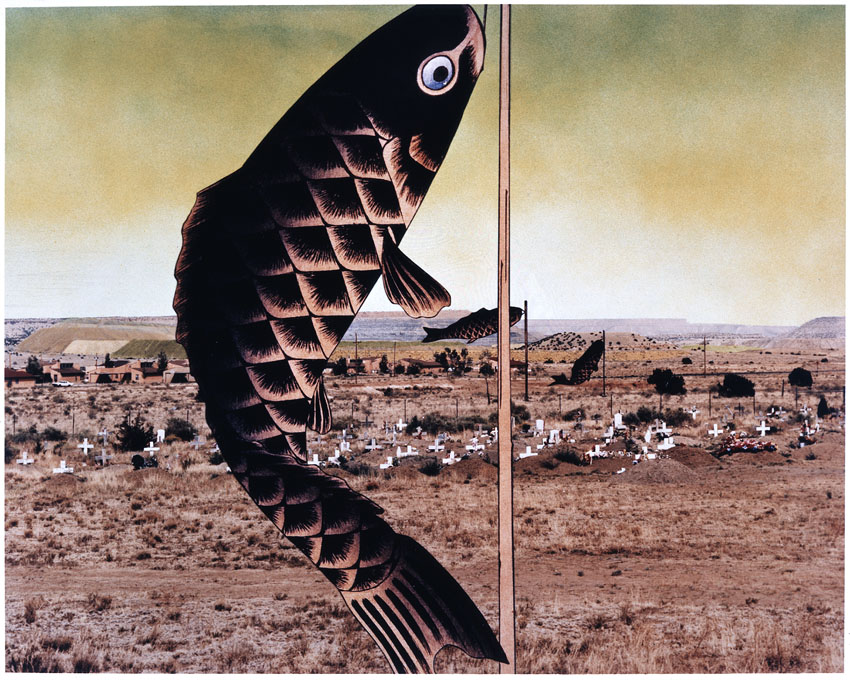 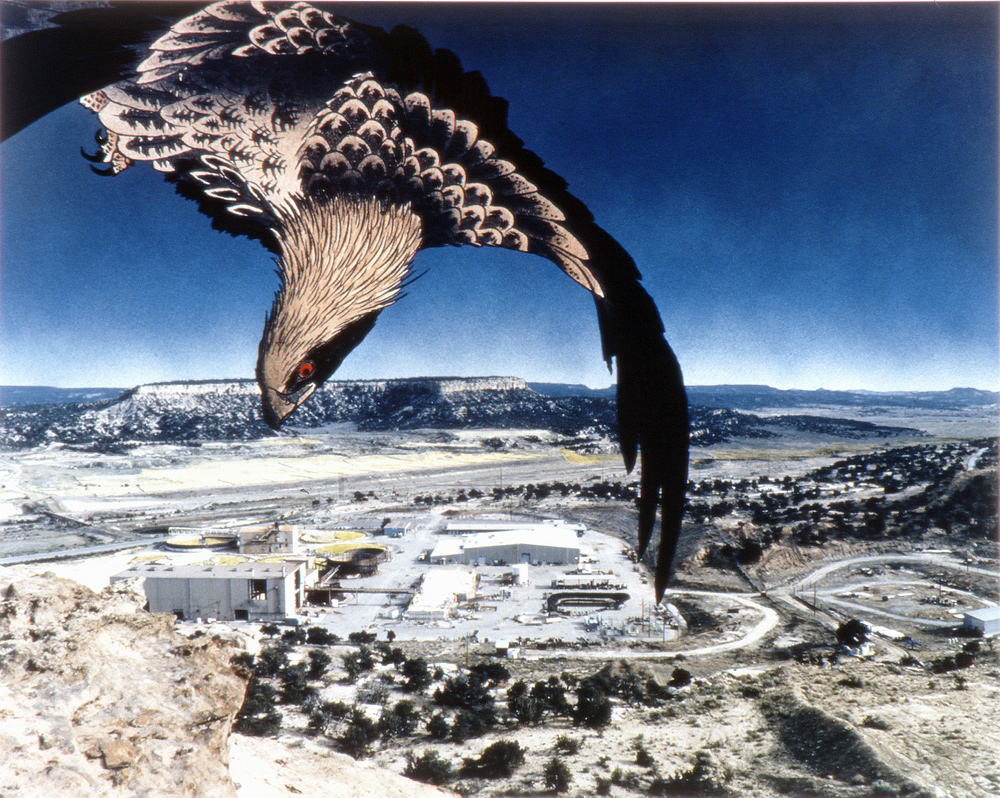 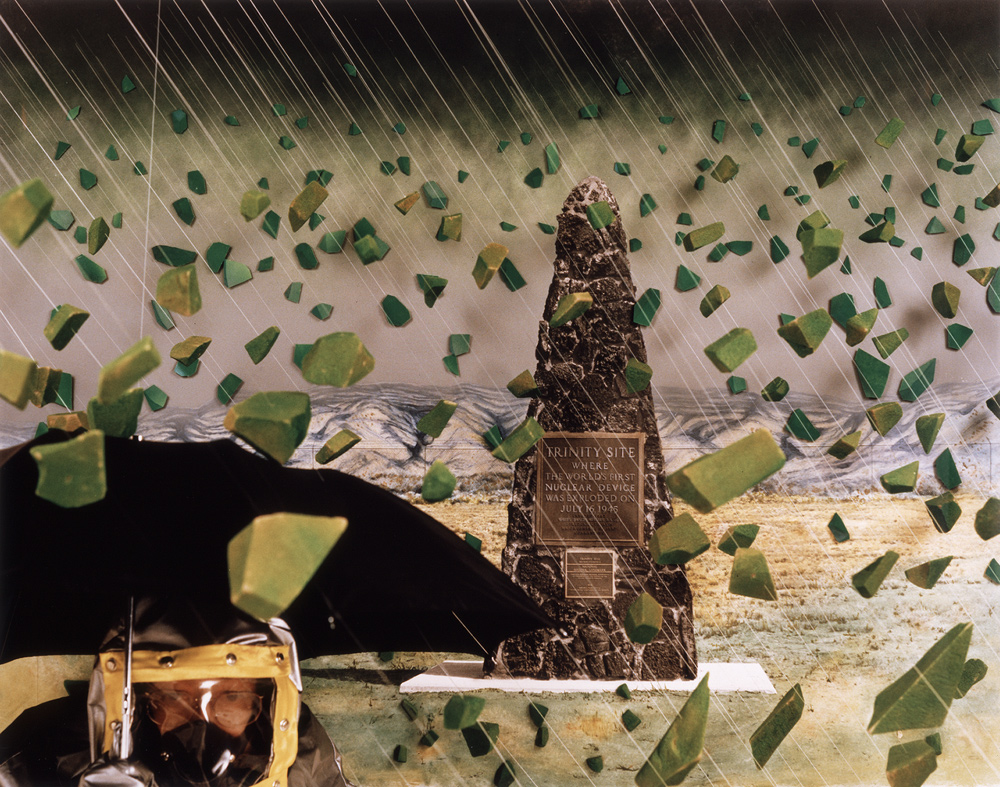 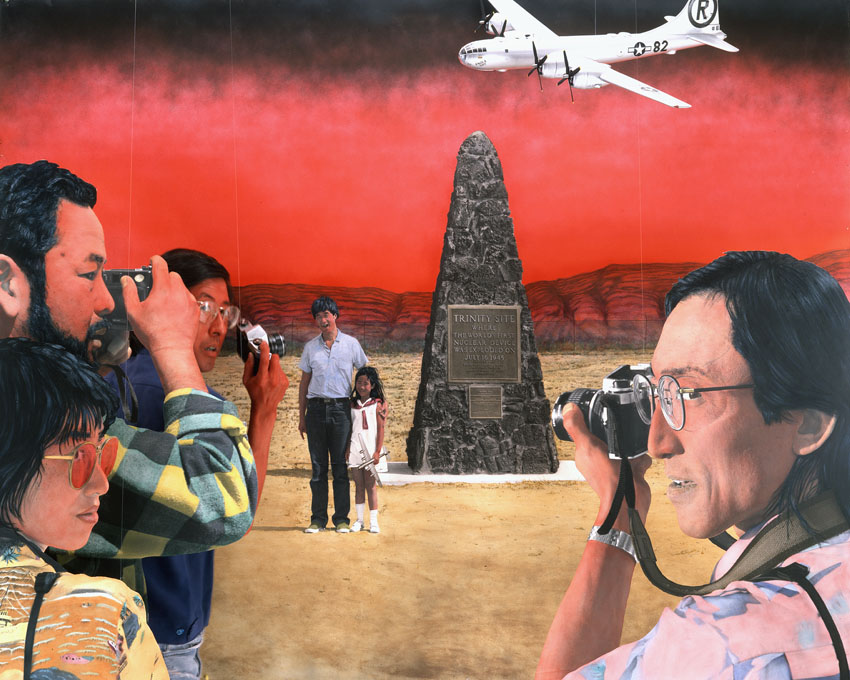 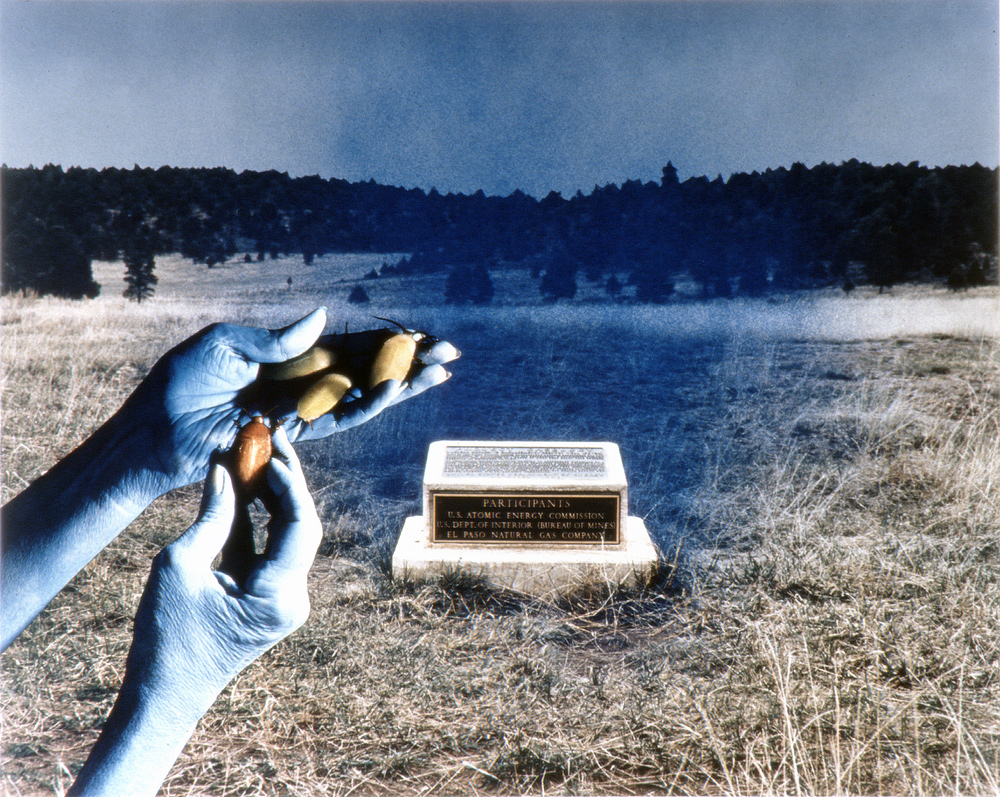 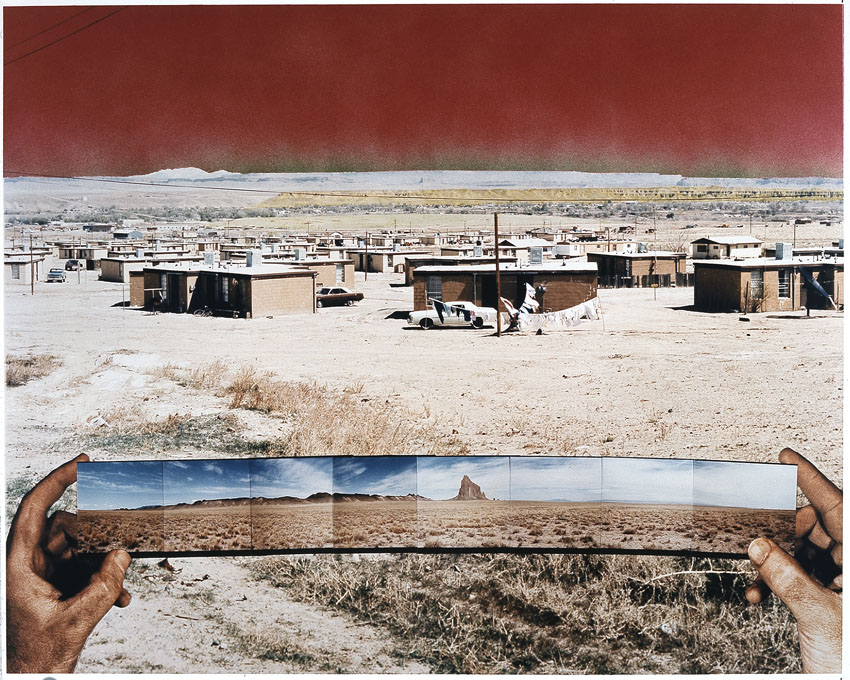 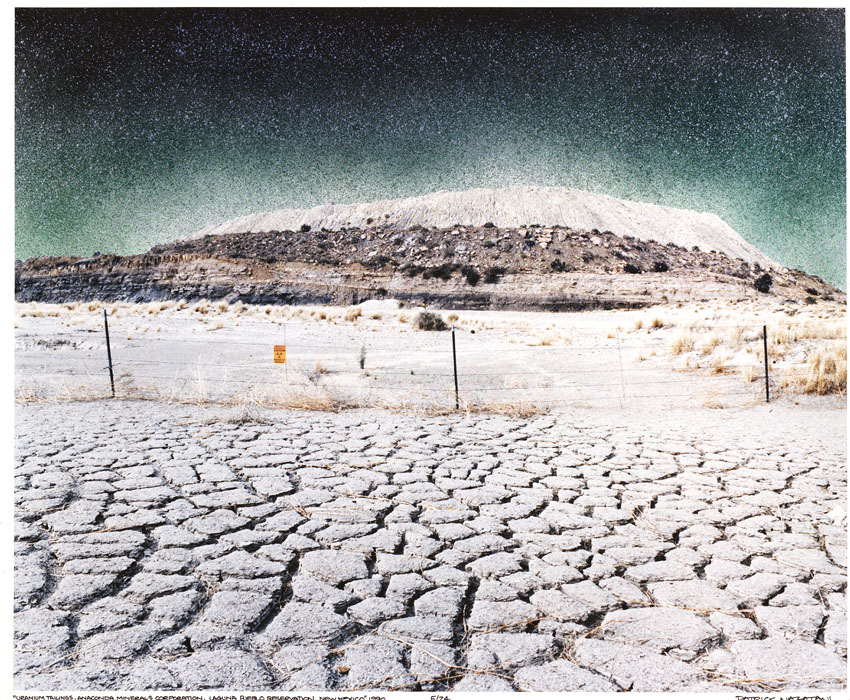